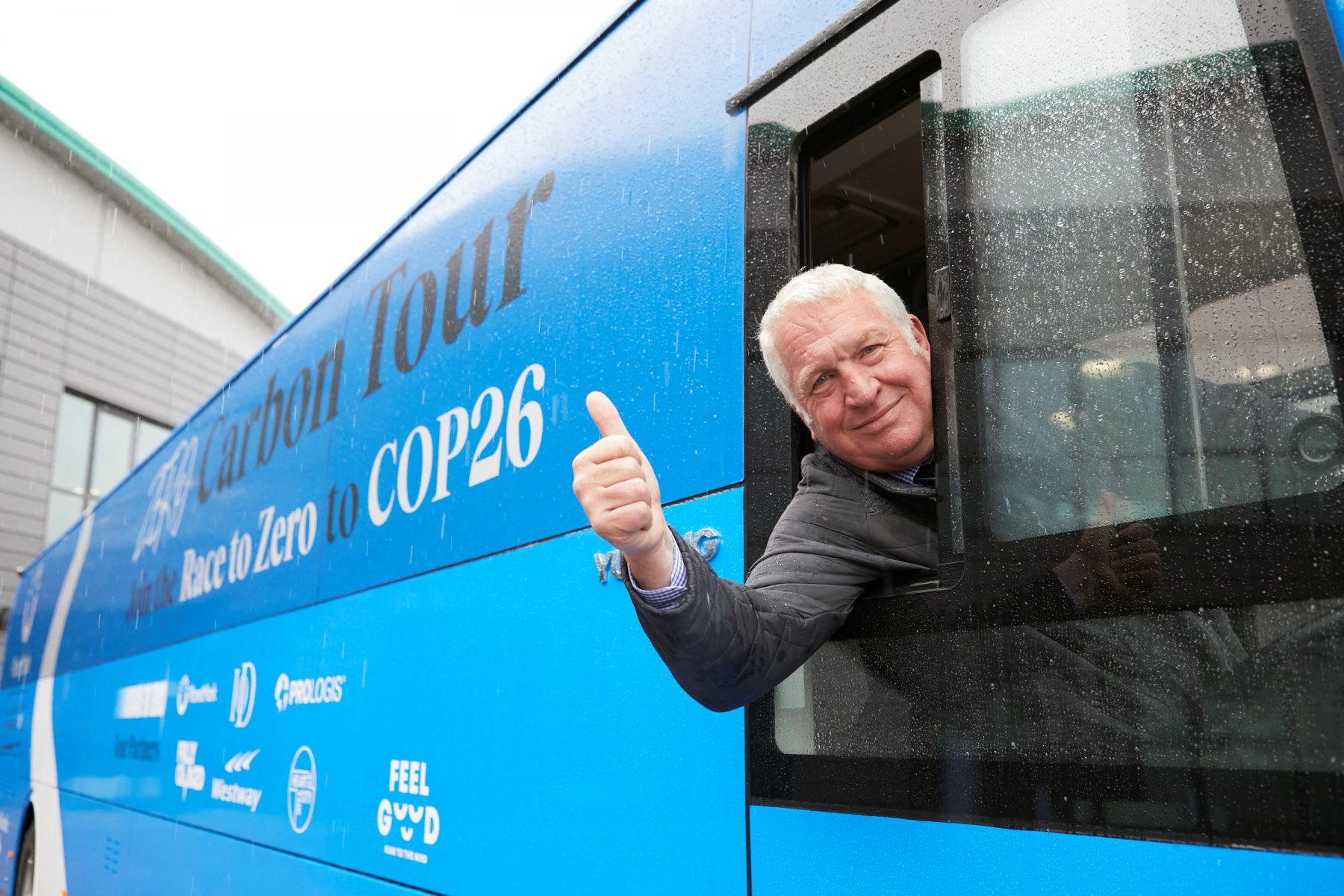 The UK’s first fully-electric ‘Carbon Battle Bus’ made a stop at Prologis Park Hemel Hempstead, as part of a Zero Carbon Tour of the UK on route to COP26 in Glasgow in November.

The Zero Carbon Tour has been organised by sustainability certification body, Planet Mark to raise awareness of the vast array of actions the business community is already taking to address the climate crisis, and to take the net zero carbon message to communities across the UK in support of the UN-backed Race to Zero campaign.

The ‘Carbon Battle Bus’ started its journey from the Houses of Parliament in London, before travelling to the Eden Project in Cornwall, to coincide with last week’s G7 summit. The Tour is sponsored by a range of businesses, including logistics property company, Prologis, and the Institute of Directors.

Speaking about the importance of helping businesses accelerate their sustainability plans, Sir Mike Penning said: “Local businesses, big and small, are fully aware of the direction we are heading in and see the business sense in reaching zero emissions well before 2050; however, some businesses lack the funds or networks to help them access advice and support, which is why I have invited the Planet Mark team back to Hemel Hempstead in the Autumn to deliver a series of free net zero carbon workshops.

“I am particularly proud of the carbon reduction initiatives I have already witnessed across Dacorum, including extensive tree-planting and some great examples of sustainable design and development. I hope as many local businesses as possible will take advantage of these workshops.”

Prologis is the UK’s largest logistics property developer and has been developing net zero carbon buildings for over 10 years. This includes buildings in Hemel Hempstead, where Prologis has just reached a £250m investment milestone, bringing jobs and growth into the local area. The business also works alongside Planet Mark to assess and measure the sustainability impact of every new building.

As one of Prologis’ most important logistics locations in the UK, the newly completed buildings on Prologis Park Hemel Hempstead, are among the most sustainable in the country and are net zero carbon in construction (based on the UK Green Building Council’s net zero carbon framework) due to the property company’s partnership with Planet Mark and Cool Earth, an NGO that protects endangered rainforest in order to combat global warming. The logistics park is also part of Herts IQ, which is creating 3 million square feet of sustainable commercial development space for future-facing businesses, just 30 minutes from London.

Thanks to a unique approach to carbon mitigation, each building on Prologis Park Hemel Hempstead has had its environmental sustainability officially certified by the Planet Mark Sustainability Certification Scheme. Working with Cool Earth, the property company then protects an area of rainforest five times greater than the embodied carbon footprint of the building, helping to lock in carbon, protect trees and empower indigenous communities to protect the rainforest for everyone’s benefit.

Prologis Park Hemel Hempstead is protecting 421 acres of rainforest in Papua New Guinea. This area of rainforest in part of the Queen’s Commonwealth Canopy, a unique network of forest conservation initiatives which involves all 53 countries of the commonwealth.

The property company’s sustainability programme also funds education officers from The Eden Project to go into local schools close to its developments and talk to the children about sustainability and how they can play their part in protecting the planet. During the development of Prologis Park Hemel Hempstead, the team delivered this programme to 524 children in 4 local schools.

The Zero Carbon Tour is closely aligned with the UN-backed Race to Zero campaign, which has seen governments and businesses around the world commit to halving greenhouse gas emissions by 2030 and achieving net zero by 2050. On the road to COP26 in Glasgow, a series of stops have been planned, providing an opportunity for businesses to find out more about how to reduce their carbon footprint. They can pre-register to attend free information sessions, carbon clinics and net zero essentials workshops, to gain the tools and knowledge needed to join the race to zero carbon emissions. The tour will also include press events and networking opportunities to help support businesses to get started on their sustainability journeys.

Speaking about the decision to become a sponsor of the Zero Carbon Tour, Simon Cox, Head of Sustainability at Prologis in the UK said:

“We have been working with Planet Mark for the past 13 years and, thanks to this partnership, every new logistics building we have developed in the UK during this period has been net zero carbon in construction.

“With the built environment responsible for a significant proportion of global carbon emissions, we want to share best practice and encourage other property developers to consider their own long-term sustainability strategies and reduce their impact on the environment.”

“This is a key moment in time, and we are aiming to give energy and impetus to the urgency of tackling the climate crisis. By embarking on our ‘Zero Carbon Tour’, we want to accelerate information and action to enable businesses to set zero carbon targets and implement credible plans and achievable steps to deliver them. Net zero brings more urgency and more opportunity for organisations to work together to tackle the climate crisis. In doing so, they are publicly demonstrating their commitments that they are organisations and brands that are here to support society and our transition to net zero. It’s an exciting time of innovation and action with the goal of a cleaner, healthier planet within our reach.”

A place to live & work